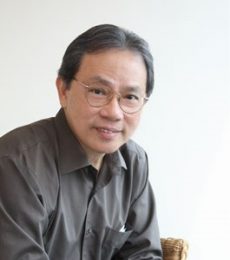 Prof Kua Ee Heok was trained as a doctor in the University of Malaya, Kuala Lumpur. His training in Psychiatry was at Oxford University and he obtained the Membership of the Royal College of Psychiatrists (UK) in 1980. He was awarded a scholarship for Geriatric Psychiatry training at Harvard University in 1984 and he received an MD for research from the National University of Singapore in 1992. He also received psychiatry research training at the National Institute of Mental Health (NIMH) USA and became a Fellow of the Royal College of Psychiatrist (UK) in 1992.

Over the years, Prof Kua has held multiple titles and contributed significantly to various hospitals and organisations. Among the various titles, he was the CEO and Medical Director of the Institute of Mental Health (IMH).  He started the first memory clinic in Singapore and served as the Head of Department of Psychological Medicine in National University of Singapore. He was the President of the Pacific Rim College of Psychiatrist and the President of the Gerontological Society. He was also involved in the board and committees of various other organizations such as the World Psychiatric Association Committee for Education and WHO Consultant for Dementia Research. He is currently Chairman of the SAF Psychiatry Advisory Board.

Areas of Practice and Interest

His special interests include psychological disorders in old age including dementia and depression. His years of experience in the management of Dementia and other mood disorders in the old age was recognized when he was awarded the Lifetime Achievement Award by the Singapore Gerontological Society. He was also awarded the Distinguished Psychiatrist Award by the Singapore Psychiatric Association. Other than medications, Prof Kua is an advocate of non pharmacological methods to slow down the progression of dementia. He started the Dementia Prevention Programme (DPP). The sessions consist of health education, music reminiscence, mindfulness therapy, gardening and a “meridian flapping” exercise.

Prof Kua had written 23 books and his novel ‘Listening to Letter from America’ is now used in Harvard University for a course on anthropology. He had published numerous articles in international psychiatric journals. He is also one of the Editors-in-chief for the 7-volume series titled ‘Mental Health and Illness Worldwide’.